From the heart of Indianapolis comes this article by Andrew Duncan, published on  the Selective Memory website, July 2, 2021.

A look back at Barbie Army and their white hot moment in 1988.

The early 1990s saw the emergence of two meaningful movements: Riot Grrrl and the cool-yet-quirky pop-punk female groups of the Northwest led by labels like K and Kill Rock Stars. However, ahead of this new women-led movement was a smattering of trailblazers, one being an all-female punk group to emerge in the late 1980s out of Chicago. Amongst a sea of angular art punk, bro metal, and the Wax Trax! movement coming out of the Windy City, Barbie Army took 1960s girl pop and beefed it up with sardonic muscle. Artistically, they not only did it their way, but they also did it better than a lot of the other bands in the deep Chicago underground.

Formed at the University of Chicago, what sets this band apart was their musical knowledge and confidence to not be afraid to appeal to the college rock scene. Yet they were snarky enough to nestle in with the punk crowd.

Originally billing themselves as the Blues “Freak” Show and diving into the Chicago blues scene for a short time, they found an opportunity to express themselves in a different light. Barbie Army became a persona that best represents the cultural resistance of ‘80s alternative youth without sacrificing the group’s personal level of intelligence. Their lyrics were adventurous, expressive, and never too serious (a proper cover of “Once Bitten Twice Shy” gives nods to The Runaways while making the listener second guess themselves—is this a joke or not?).

People at the time often did not take them as seriously as they should have. Some YouTube commenters admit to kicking themselves in the ass for not paying more attention at the time. However, their personal conflicts had scorched a creative spark in the Midwest punk scene, sentencing them to niche music history. What remains most impressive is how well their initial album recording sounded. “Take Down The Flag” should be on everyone’s mixtape roster.

Barbie Army included founding members Jean Lyons and Mary Dean on guitars, Tina Matlock on drums and Judy Johnson on bass. Lyons and Johnson spent some time in the 1985 band Fudge Tunnel (not the Nottingham, England doom band of the same name).

In Barbie's day, nobody could go home until the flag was taken down and folded properly. Copyright 1985.

You—an alum of a certain vintage—saw the flyers stapled to billboards in Hutch Court, in front of Cobb, along 57th Street, mixed in with stickers blaring U.S. out of El Salvador and Impeach Bonzo. They advertised concerts at the Blue Gargoyle or Delta Upsilon. The band names 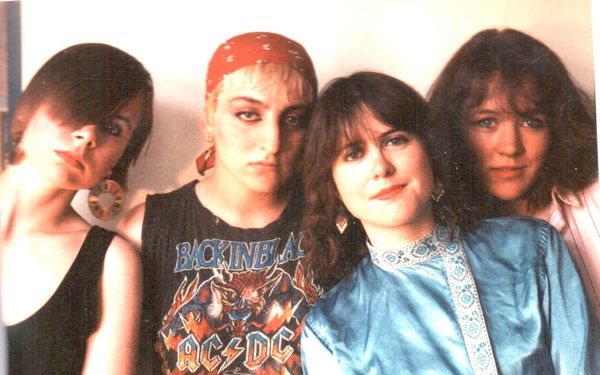 I ain't proud of what I've done. But what's a girl to do for fun?